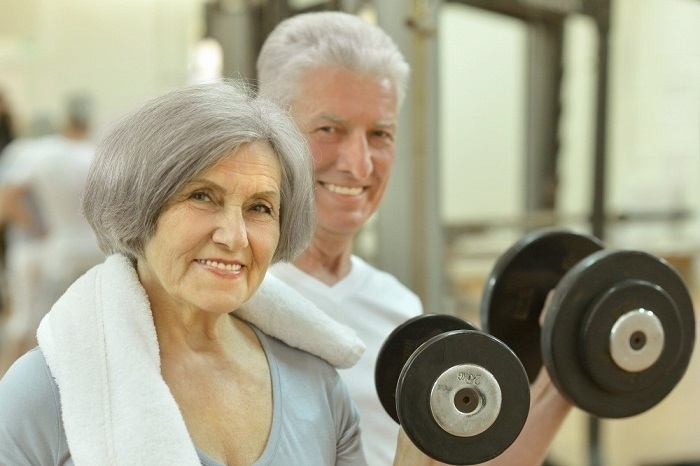 3 Reasons You Should Be Lifting Weights in Retirement

Ray Clark was 102 years old and 150 lbs. He was on his third pacemaker, losing his eyesight to macular degeneration, and had difficulty hearing.  When I first read about him, he was working out in the gym with his 70-year-old personal trainer, doing 40 lb. curls and knocking out reps on a seated rowing machine.  At 98, Ray had decided it was time to get into the gym.  After losing his wife of 67 years and then his daughter, he needed to find something to fill the time.  In a 2013 interview with the Washington Post (1), Clark said, "I was getting a bit lazy at home, and I decided I'd go down to the exercise club."   Ray passed away a few years ago, and his story had me thinking about how few seniors seem to fully appreciate the enormous benefits of weight training.

While we can all agree that Ray is some sort of superman, the truth is health experts have long recommended retirees add strength training to their workout routine.  This really came to my attention over the past few years, as several recent studies have found a strong correlation between strength training and living longer. While many of our retired clients prioritize health and fitness, too often it seems their workout is focused exclusively on cardiovascular exercise.  All exercise has benefits, but it seems that strength training has gotten little attention from most retirees.  Recent studies from the National Institutes of Health (2) report that less than 15% of those over 60 participate in resistance training on a regular basis.  Here are 3 reasons why you should be lifting weights if you’re retired:

Beginning in our 40's, we start losing around 5% of our muscle mass each decade.  Science has proven that seniors who lift weights can reverse or slow this process.  We also know that strength training can reduce weight and help prevent muscle and bone loss related to normal aging. Staying physically stronger into your later years can also make traveling easier and time spent with the grandbabies more enjoyable.  Studies have also found that people suffering from depression benefited greatly from resistance training two or more days a week, and it was found to be even more beneficial for those with more severe depressive symptoms.  Even if you are one of those annoyingly positive people already, these trials show a strong mood boost and increased self-confidence associated with weight training.

In a 2016 study, researchers at Penn State and Columbia University found that older adults who did strength training twice a week had 46% lower odds of death for any reason than those who did not.  Specifically, they had 41% lower odds of cardiac death and 19% lower odds of dying from cancer (3).  The study was the first to demonstrate the association in a large, nationally representative sample over an extended time period, particularly in an older population.   Another study published in the Journal of the American Heart Association found that women in their 60's who spent 1 to 2.5 hours engaged in strength training weekly were less likely to die from heart disease or any other cause during the 12-year study period (4).  The evidence seems clear - lack of muscle strength leads to becoming more sedentary, which increases the risk of chronic disease and death.

If you've never lifted weights, you might feel that it's too late to begin strength training once you retire.  Or maybe you pumped a lot of iron in your youth but haven't been in a gym in years.  But as Ray Clark has found, seniors respond to strength training as well as younger people.  A recent study of nursing home residents ranging in age from 77 to 90 showed improvement of 60% to 100% in their strength in just 8 weeks of doing strength training (5).  A few years ago, I read an inspiring article about Charles Eugster, who was working with a trainer to get his "beach body" ready for summer despite pulling his hamstring at a race the previous month.  Did I mention that Charles was 96 at the time?  He didn't start doing any serious weight training until he was 87, and he didn't start running until he turned 95.  "In my opinion, you can rebuild your body at any age,'' he said. "You can learn something new or start a new life at any age."  If you’re feeling hesitant about getting back to the gym, there are a number of great resources available to help you.  Silver Sneakers is a free fitness program for seniors that is included with a number of Medicare Advantage and Medicare Supplement (MediGap) plans.  It includes access to participating gyms at more than 17,000 locations across the U.S., along with instructor-led yoga, dance and other fitness classes.  If you're not interested in going to the gym, take heart.  Exercises using body weight such as lunges, sit-ups, and pushups reap many of the same benefits as pumping iron.  Even daily living activities such as picking up groceries and climbing stairs can be helpful.

While we all recognize the benefits of aerobic exercise, retirees in particular seem to be unaware of the longevity benefits of weightlifting.  Be sure to check with your doctor before starting any fitness regimen and balance your exercise with a healthy diet and a good night’s sleep.  While we may not build biceps like Arnold Schwarzenegger, people like Ray Clark and Charles Eugster have shown us we can all improve our life expectancy, strength, endurance, and mental outlook by adding a little strength training into our weekly routine.